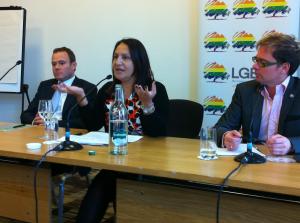 In a meeting today with Turkish Cypriot leader Derviş Eroğlu, Marina Yannakoudakis, Conservative MEP for London, protested against the continued ban on homosexuality in the northern part of Cyprus.

Marina received assurances from Dr. Eroğlu that the Turkish Cypriot community was seeking to repeal the ban. Dr. Eroğlu then promised Marina that he would sign the repeal into law.

Following the meeting, Marina said: “It’s not illegal to be gay anywhere else in Europe; it’s not illegal to be gay in Turkey. Chapter 154 of the penal code is an anachronism and needs to be repealed. All Cypriot adults should have the right to engage in consensual sex be it with the same or different gender. I hope that Dr. Eroğlu will keep the promise he made to me to rescind the ban and I will keep the pressure on him until he does.”

The northern part of Cyprus is the last place in Europe where homosexuality is still illegal. The recent high-profile arrest of three men accused of “conspiring to have a sexual intercourse against the order of nature” has brought the law on homosexuality in the north of Cyprus into stark focus. Violations of the law can result in a prison-sentence of up to five years.

Marina was visiting Nicosia as a member of the European Parliament’s High-Level Contact Group for Relations with the Turkish Cypriot Community.

Posted by shortbusmovement on October 20, 2011 in News in English.

SHORTBUS MOVEMENT is a civil society initiative consists of Human Rights activists whose roles and positions change during each activity. SHORTBUS is a team of dedicated volunteer individuals who believe that all people are equal, irrespective of sexual orientation, gender identity, sex or any other status. The group’s center is located in northern part of Cyprus and they aimed to support all the individual or organizational activities of Lesbian, Gay, Bisexual, Trans and Intersex (LGBTI) people of Turkish Community of Cyprus.
View all posts by shortbusmovement »